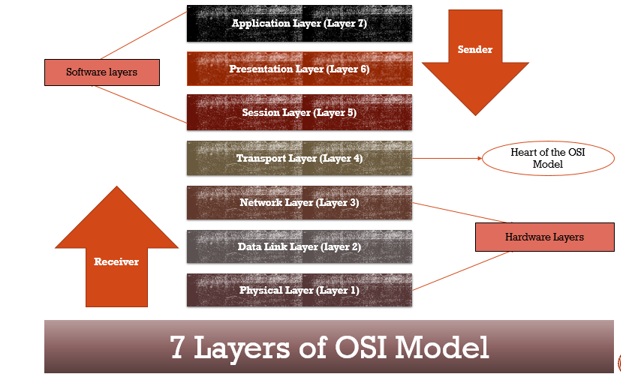 OSI Layers – Open System Interconnection Model is a framework that describes the characteristics and communications functions of telecommunication or computing systems. OSI model became popular around the 1980s and was adopted by computer and telecommunication companies.

OSI model is still used to understand the TCP/IP concept, this concept of 7 layers model was provided by Charles Bachman at Honeywell Information system.  OSI model is widely used around the globe which contains 7 layers and explains the data transfer from Source “A” to destination “B” around the internet.

It is the lowest layer in the OSI model, this layer is responsible for physical connections between the devices. It is also called as Layer 1 OSI model which transmits the data in bits i.e., 0s and 1s. The physical layer will receive the signals in various formats like digital, electrical, radio signals and convert them to bits (0, 1) and send them next layer called the Data Link layer.

The second layer or Layer2 of the OSI model is a protocol responsible for data transfer from Node A to Node B in WAN (Wide Area Network)/LAN (Local Area Network) segments. The main function of this layer is to transfer data between the networks which detects and corrects an error that may occur in the Physical layer.

When DLL receives the data packet, it transfers to the Host using the MAC address of the destination host. The Units of DLL are called frames, where the received packets are divided into frames.

This layer is responsible for packet forwarding to the intended destination based upon the address contained in the frame received from DLL. Network Layer finds the destination using logical addressing called IP (Internet Protocol) addressing. The IP address of the sender and receiver is placed to route the packets. Packets are referred to as Segments in the Network layer.

Functions of the Network layer,

This is the layer where you’ll find one of the popular networking protocols called TCP (Transmission Control Protocol) and UDP (User Datagram Protocol) which is responsible for end-to-end packet delivery. The transport layer communicates with the Application layer by making system calls through protocols and this layer 4 is operated by the Operating system level, also this layer is called as Heart of the OSI Model.

TCP also ensures that it receives the acknowledgment from the source and destination packets to rectify the correct packets sent and received in Sequential format without any errors in packet counts & data size. TCP is used for Connection-Oriented Protocol, whereas the connectionless User Datagram Protocol (UDP) is used for simple messaging transformation differs from TCP functionalities.

Session Layer is responsible for opening, closing, and managing the sessions between the different computer nodes ie, a session between Comp A to Comp B. For transmitting the data over the network there must be a session established and this layer makes sure that the sessions are properly established and maintained.

Session layers are commonly used in application environments that make use of Remote Procedure Call (RPC) which includes authentication and reconnection services.

The function of layer 6,

For example of Layer 6 :

The highest level of the OSI model is closest to the user, which means the user and application layer directly interact with each other and deals with the software applications to communicate over the network. A commonly used application layer is HTTP (Hypertext Transfer Protocol ) which is used in Web browsers like Chrome, IE, Firefox, etc.,

The function of the Application layer,

For Example of layer 7 :