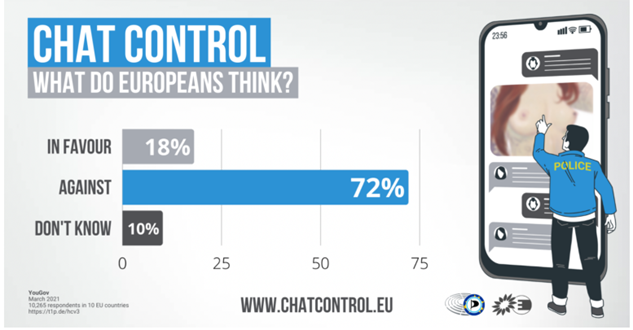 On 6th July 2021, European Parliament has approved the Eprivacy Derogation, which is allowing to monitor the email and messaging services of each citizen to check and report the suspected activity cases to the Police department. But European pirate parties have strongly condemned the surveillance against their citizens.

But the 537 members of the European parliament have been voted to approve the Chat control against the EU citizens.

As the announcement, the European Parliament committee has given the regulation to follow-up to make chat control mandatory to all email and messaging services providers. And already secured with end-to-end applications like WhatsApp and Signal application has been forced to install a backdoor. This is similar to the German Government spy which installed a backdoor called StateTrojan.

Europe wants to have control over all the private messages, e-mail, and messages to search the suspicious contents automatically and report the cases and take immediate actions. It also stated that to control and prosecute Child Pornography the real-mass surveillance has been applied to the citizens which will monitor the real-time time chats and messages and the end of the Privacy of Digital Correspondence.

How would this effect the citizens?

What Citizens can do to stop this?

You can check here for more details on European Private party and Chat Control policies.